The public referenda chamber is one of the three bodies of on-chain governance as it’s instantiated in Phala and Khala. The other two bodies are the council and the technical committee.

Public referenda can be proposed and voted on by any token holder in the system as long as they provide a bond. After a proposal is made, others can agree with it by seconding it and putting up tokens equal to the original bond. Every launch period, the most seconded proposal will be moved to the public referenda table where it can be voted upon. Voters who are willing to lock up their tokens for a greater duration of time can do so and get their vote amplified. For more details on the governance system please see here.

This guide will instruct token holders how to propose and vote on public referenda using the Democracy module as it’s implemented in Khala.

The important parameters to be aware of when voting using the Democracy module are as follow:

Voting Period - How often votes for referenda are tallied.

Minimum Deposit - The minimum amount to be used as a deposit for a public referendum proposal.

Enactment Period - The minimum period for locking funds and the period between a proposal being approved and enacted.

Cooloff Period - The period in blocks where a proposal may not be re-submitted after being vetoed.

Proposing an action to be taken requires you to bond some tokens. In order to ensure you have enough tokens to make the minimum deposit you can check the parameter in the chain state. The bonded tokens will only be released once the proposal is tabled (that is, brought to a vote); there is no way for the user to “revoke” their proposal and get the bond back before it has become a referendum. Since it is essentially impossible to predict definitely when a proposal may become a referendum (if ever), this means that any tokens bonded will be locked for an indeterminate amount of time.

Proposals cannot be revoked by the proposer, even if they never turn into a referendum. It is important to realize that there is no guarantee that PHA you use for proposing or seconding a proposal will be returned to that account in any given timeframe.

For example, if you wanted to propose that the account “Dave” would have a balance of 10 tokens your proposal may look something like the below image. The preimage hash would be 0xa50af1fadfca818feea213762d14cd198404d5496bca691294ec724be9d2a4c0. You can copy this preimage hash and save it for the next step. There is no need to click Submit Preimage at this point, though you could. We’ll go over that in the next section. 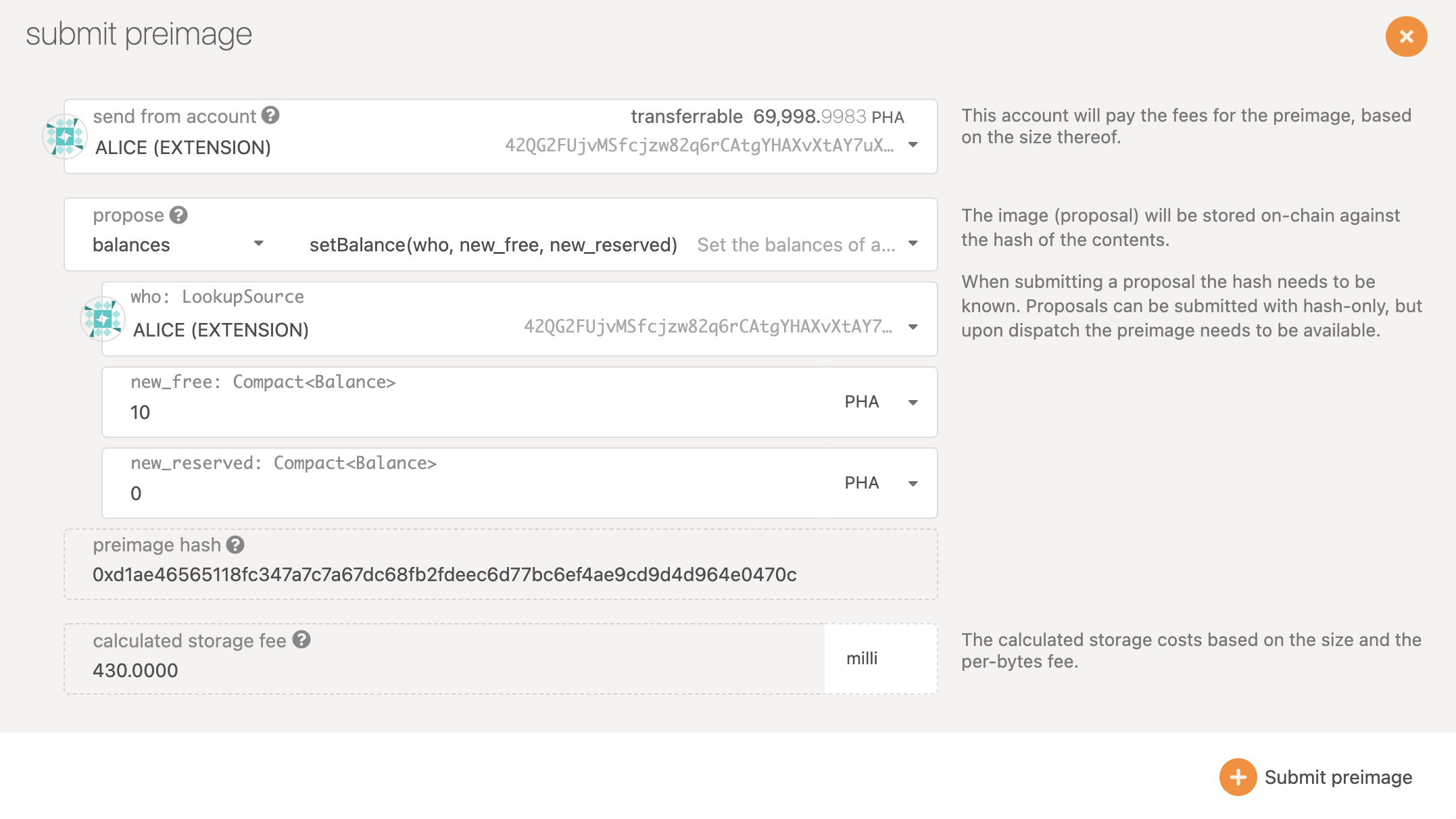 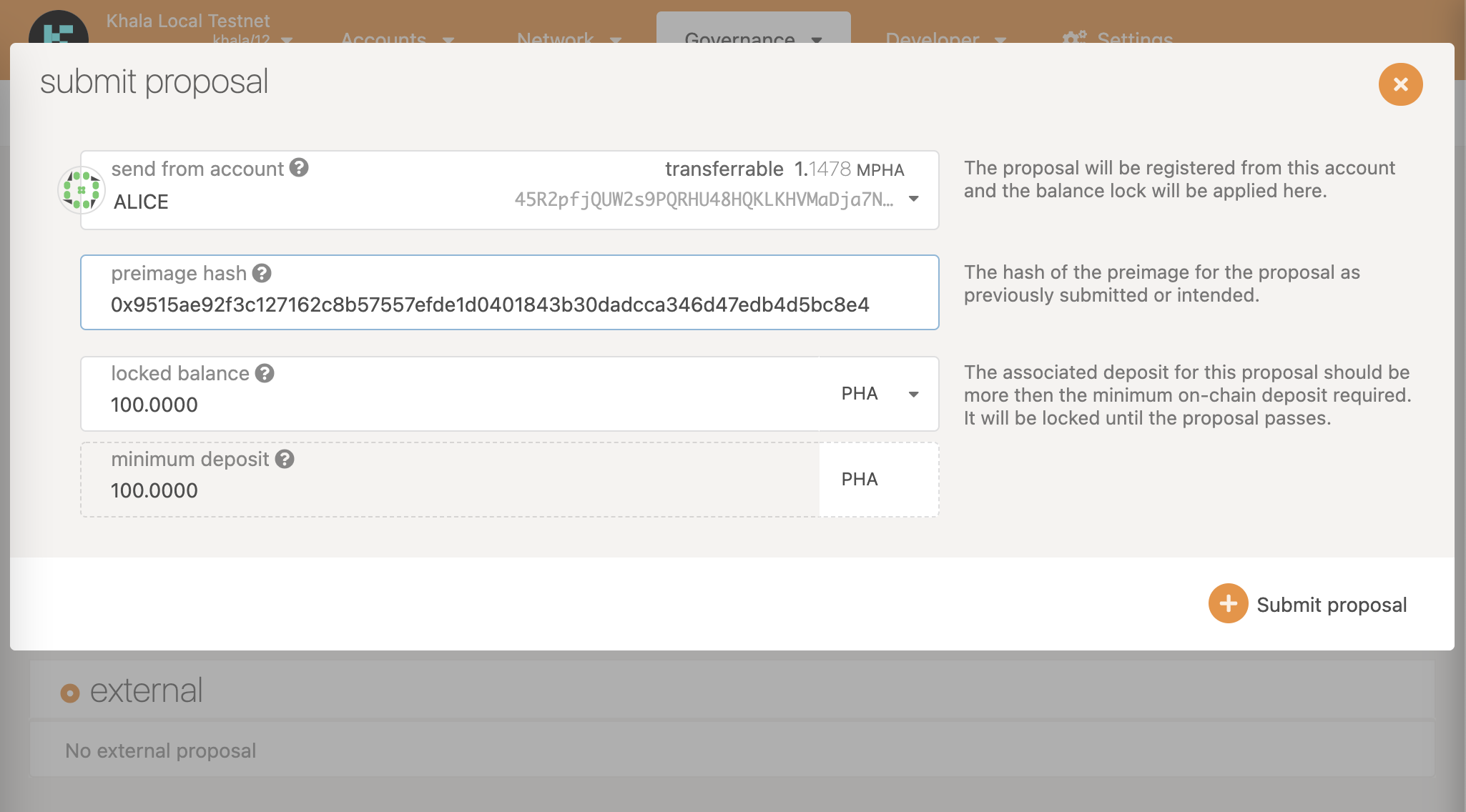 Now your proposal is visible by anyone who accesses the chain and others can second it or submit a preimage. However, it’s hard to tell what exactly this proposal does since it shows the hash of the action. Other holders will not be able to make a judgement for whether they second it or not until someone submits the actual preimage for this proposal. In the next step you will submit the preimage.

However, at some point before the proposal passes you will need to submit the preimage or else the proposal cannot be enacted. The guide will now show you how to do this.

Click on the orange “Submit preimage” button and configure it to be the same as what you did before to acquire the preimage hash. This time, instead of copying the hash to another tab, you will follow through and click “Submit preimage” and confirm the transaction. 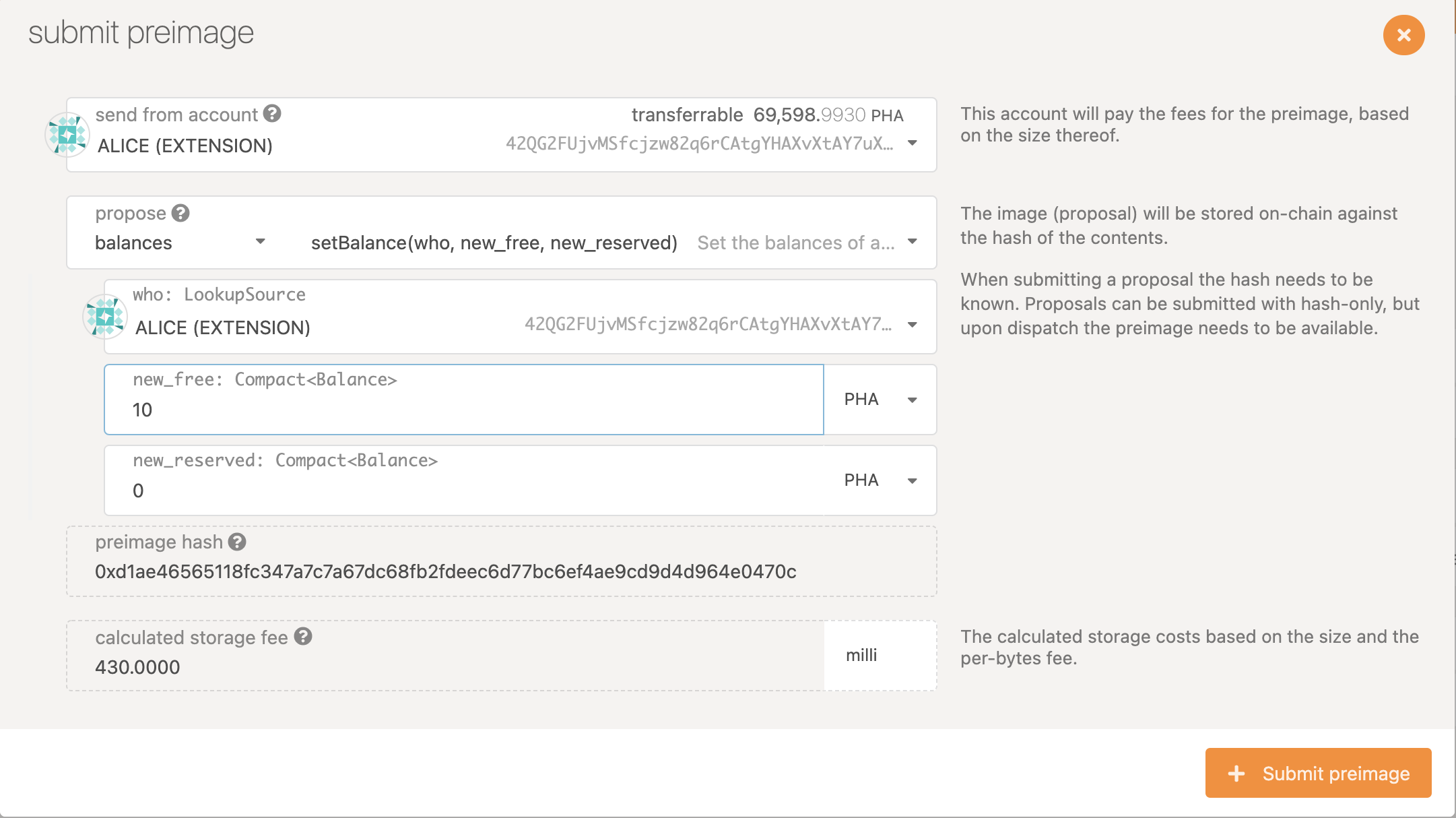 Once the transaction is included you should see the UI update with the information for your already submitted proposal. 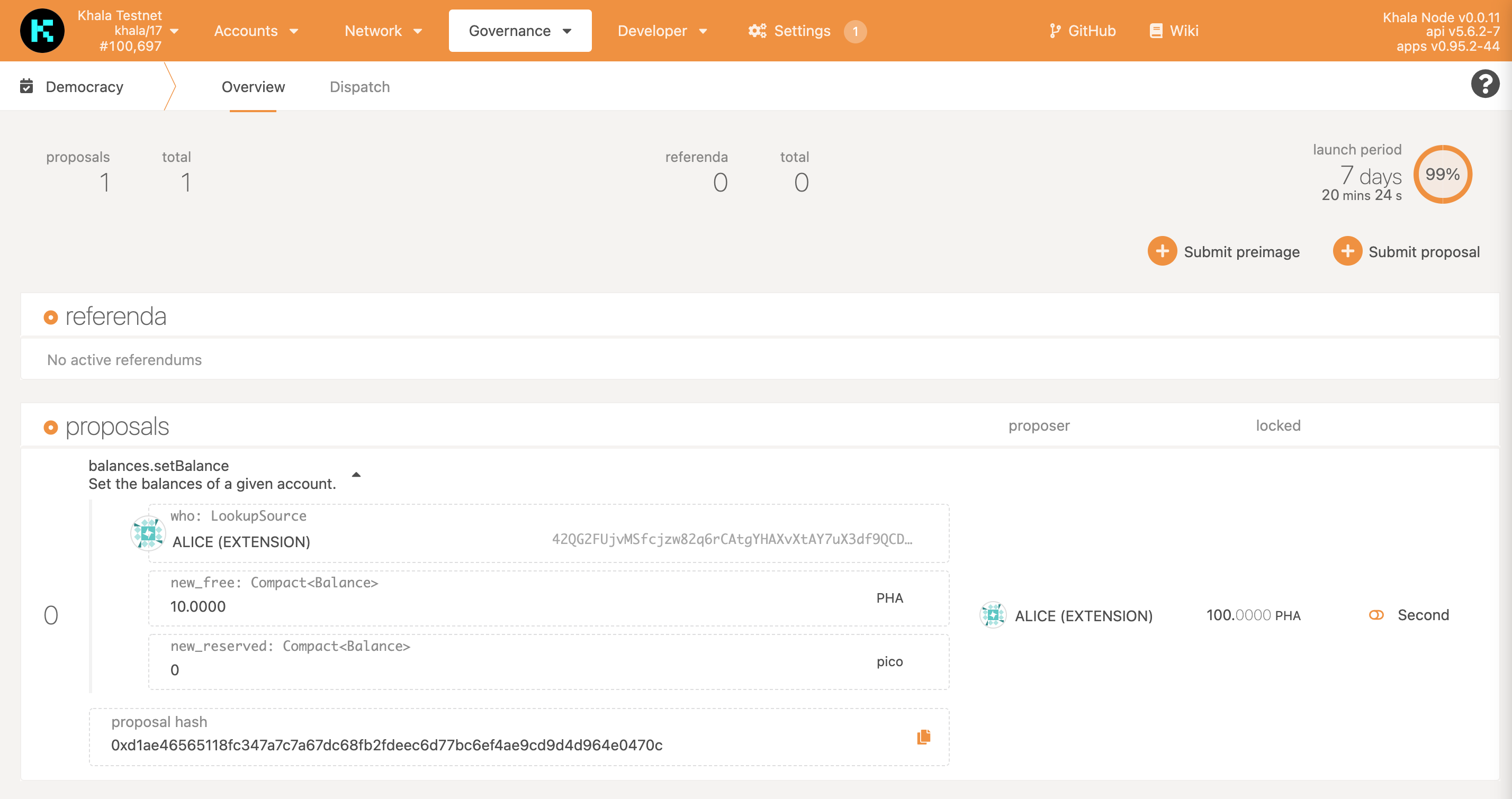 Seconding a proposal means that you are agreeing with the proposal and backing it with an equal amount of deposit as was originally locked. The bonded tokens will be released once the proposal is tabled (that is, brought to a vote), just like the original proposer’s bond. By seconding a proposal you will move it higher up the rank of proposals. The most seconded proposal — in value, not number of supporters — will be brought to a referendum every launch period.

It is important to note that there is no way to stop or cancel seconding a proposal once it has been done. Therefore, the PHA that was seconded will be reserved until the proposal is tabled as a referendum. This is an indeterminate amount of time, since there is no guarantee that a proposal will become a referendum for a given period, as other proposals may be proposed and tabled before it.

To second a proposal, navigate to the proposal you want to second and click on the “Second” button.

You will be prompted with the full details of the proposal (if the preimage has been submitted!) and can then broadcast the transaction by clicking the orange “Second” button.

Once successful you will see your second appear in the dropdown in the proposal details.

Voting on a Proposal#

At the end of each launch period, the most seconded proposal will move to referendum. During this time you can cast a vote for or against the proposal. You may also lock up your tokens for a greater length of time to weigh your vote more strongly. During the time your tokens are locked, you are unable to transfer them, however they can still be used for further votes. Locks are layered on top of each other, so 7-days lock will become a total 14-days lock if you vote again.

To vote on a referendum, navigate to the “Democracy” tab of Khala . Any active referendum will show in the “referenda” column. Click the blue button “Vote” to cast a vote for the referendum. 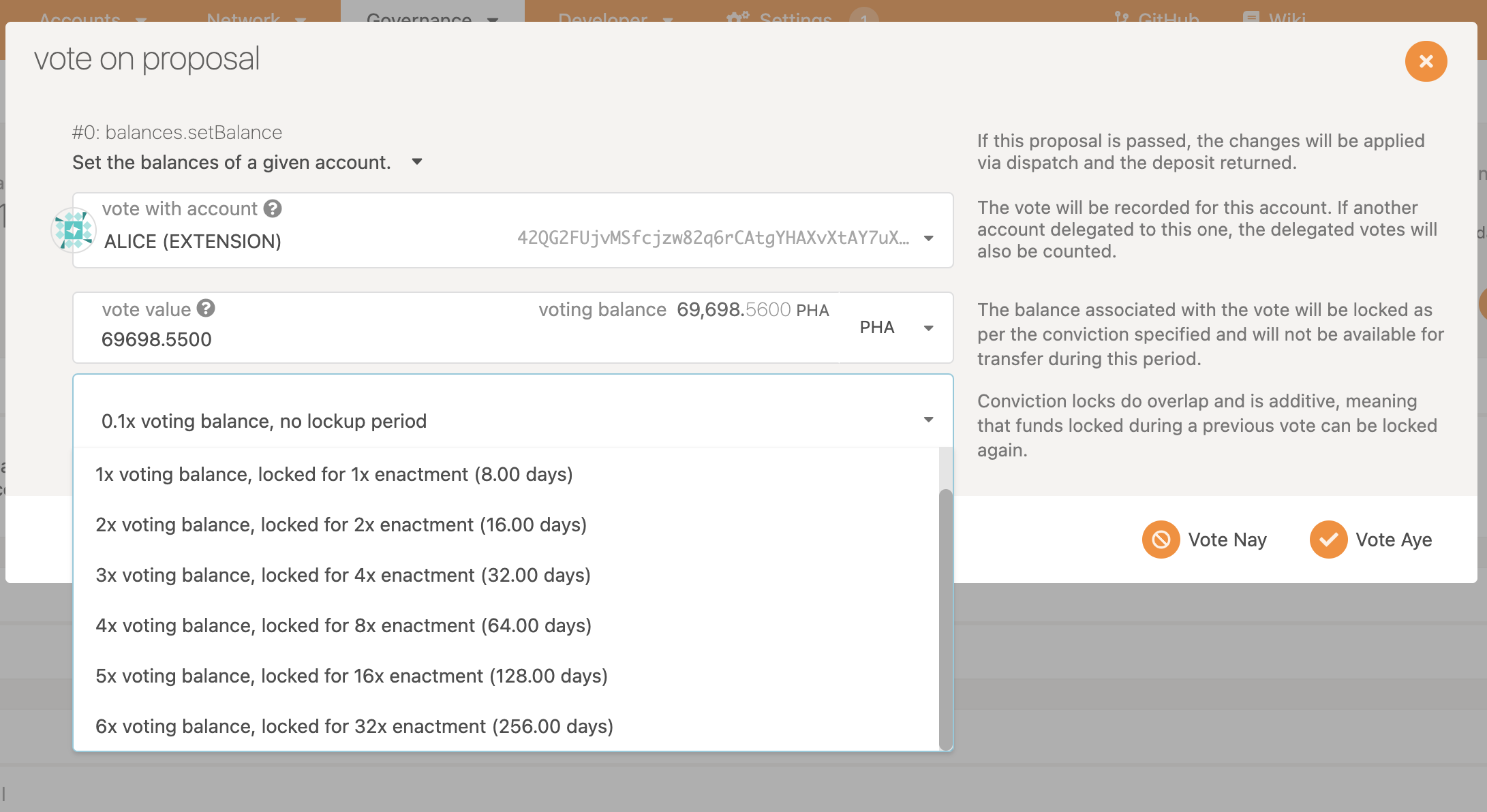 The second option is to select your conviction for this vote. The longer you are willing to lock your tokens, the stronger your vote will be weighted. The timeline for the conviction starts after the voting period ends; tokens used for voting will always be locked until the end of the voting period, no matter what conviction you vote with. Unwillingness to lock your tokens means that your vote only counts for 10% of the tokens that you hold, while the maximum lock up of 256 days means you can make your vote count for 600% of the tokens that you hold.

When you are comfortable with the decision you have made, click the orange “Vote” button to submit your transaction and wait for it to be included in a block.

Like vesting, the tokens that are locked in democracy are unlocked lazily. This means that you, the user, must explicitly call an unlock extrinsic to make your funds available again after the lock expires. Unbonding is another term you hear a lot in Phala, it means withdrawing your PHA that was used in staking. To know more about it, please see here.

You can do this from the “Accounts” page in Khala, unless you use Ledger. First check that your account has a “democracy” lock by opening the details on your balance. In the example below the account has 9 PHA locked in democracy. 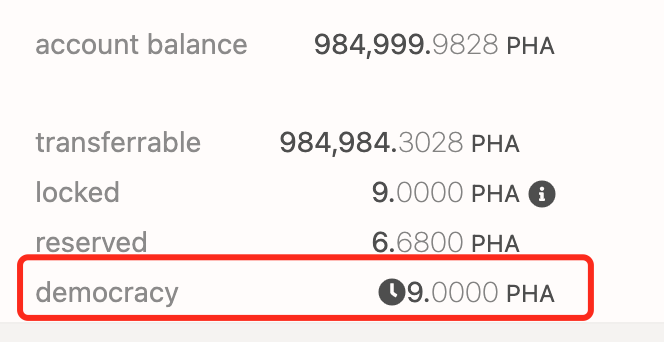 Now you can click the menu button on Apps and find the option that says “Clear expired democracy locks”. After selecting this option you may confirm the transaction and your locks will be cleared when successful.

If you are too busy to keep up and vote on upcoming referenda, there is an option to delegate your vote to another account whose opinion you trust. When you delegate to another account, that account gets the added voting power of your tokens along with the conviction that you set. The conviction for delegation works just like the conviction for regular voting, except your tokens may be locked longer than they would normally since locking resets when you undelegate your vote.

The account that is being delegated to does not make any special action once the delegation is in place. They can continue to vote on referenda how they see fit. The difference is now when the Democracy system tallies votes, the delegated tokens now are added to whatever vote the delegatee has made.

You can delegate your vote to another account and even attach a “Conviction” to the delegation. Navigate to the “Extrinsics” tab on Phala Apps and select the options “democracy” and “delegate”. This means you are accessing the democracy pallet and choosing the delegate transaction type to send. Your delegation will count toward whatever the account you delegated for votes on until you explicitly undelegate your vote.

After you send the delegate transaction, you can verify it went through by navigating to the “Chain State” tab and selecting the “democracy” and “Voting” options. You will see an output similar to below, showing the addresses to which you have delegated your voting power.

You may decide at some point in the future to remove your delegation to a target account. In this case, your tokens will be locked for the maximum amount of time in accordance with the conviction you set at the beginning of the delegation. For example, if you chose “2x” delegation for 16 days lock up time, your tokens will be locked for 16 days after sending the undelegate transaction. Once your vote has been undelegated, you are in control of making votes with it once again. You can start to vote directly, or chose a different account to act as your delegate.

The easiest way to do this is from the “Extrinsics” tab of Polkadot Apps. Select the “democracy” pallet and the “undelegate” transaction type. Ensure that you are sending the transaction from the account you want to clear of delegations. Click “Submit transaction” and confirm.

Voting with a Governance Proxy#

Making a vote on behalf of a stash requires a “proxy” transaction from the Proxy pallet. When you choose this transaction from the “Extrinsics” tab, it will let you select “vote” from the Democracy pallet, and you will specify the index of the referendum that is being voted, the judgement (i.e. “Aye” for approval or “Nay” for rejection), and the conviction, just like a normal vote.

For more material on adding and removing Governance proxies, as well as other types, please see the [Proxy page](/en-us/maintain/governance/2-join-the-council/.

Consider the following example showcasing how votes would be displayed on a block explorer.

At first glance, it may be difficult to interpret what you voted on. We need to take a step back and consider the “voting data” at the binary level.

The vote is stored as a byte using a bitfield data structure and displayed on the block explorer as a decimal integer. The bitfield stores both the conviction and aye/nay boolean, where the boolean is represented using the MSB of the byte. This would mean that the grouping of the 7 remaining bits is used to store the conviction.